We use cookies to offer the best possible service. By continuing to browse our site, you agree to our use of cookies.
COVID-19 and deliveries 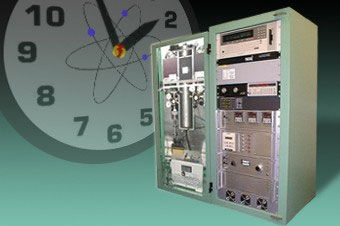 Since the beginning of time measurement people have been trying to measure time more and more precise. The most precise time in the world today is the atomic time, based upon the International System of Units (SI) second.

Everywhere in the world there are many time institutes, which measure the atomic time through caesium atomic clocks. The international atomic time (TAI) is determined in the Bureau International des Poids et des Mesures (International Bureau of Weights and Measures) in Paris. The Bureau evaluates the data of ca. 260 atomic clocks from 60 different time institutes all over the world, and then deduce the international atomic time from them. Many of these caesium atomic clocks can be found in the Physikalisch-Technischen-Bundesanstalt (PTB) in Braunschweig, Germany, where the German daylight saving time is determined. The atomic time evaluated in the PTB is called TA. The radio signal communicates the atomic time of Braunschweig to a radio tower in Mainflingen, Frankfurt. From there the signal gets to all the radio-controlled watches and clocks, communicating the exact time.

Given that the earth rotation and revolution are subject to minor oscillations, the current time unit is based on the SI second, because it is a constant found in nature. Therefore, it is more logical for the everyday life to have a time synchronised with the solar time.

Given that the solar time and atomic time arent synchronised because of the earth variability, the Coordinated Universal Time (UTC) comes in, being synchronised with the solar time. The time deviation is calculated through the UTC and summarized in the so-called leap year. Every four year the calendar gets therefore extended of a day, through the 29th February. Although the UTC is also based on the SI second.

The concept for the SI second derives from the duration of the electrons frequency of free atoms. To evaluate the atomic time as well as the SI second it is necessary to use atomic clocks. In an atomic clock the caesium atoms (Cs) get vaporized in an oven. After that, the caesium atoms are in the energetically lowest stadium possible. They get magnetically sorted. Only one batch of them arrives to the cavity resonator, in which the atoms change their stadium through the radiating of a magnetic microwave field. When they leave the resonator, they get collected in a special chamber. When a precise frequency of the microwave field has been reached, the quantity of atoms collected is larger and makes the frequency stop, letting it be measured. After a duration of exactly 9 192 631 770 periods a second has passed. Through this frequency, as well as the SI second, the atomic clock determines the atomic time.

At the moment, the atomic clock is the most precise instrument to measure the time. The variation of the atomic time is ca. 1 second in 3 million years. That means that the atomic clock deviates, as opposed to an ideal clock, of just 25-12 billionths throughout the year. In a quartz clock or watch the difference is of many seconds every month, whereas in a mechanic watch even bigger. No wonder then that the caesium or atomic clocks are used for research, stock exchange trade and so on, all over the world.

You can choose the following payments from our shop: PayPal, credit card and prepayment. For more information visit payment methods & FAQ More payments: prepayment with 3% off for wristwatches 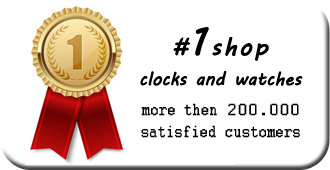